Getting to Know Roof Inspection at a Broader Context

The main reason why this topic is being discussed is to create awareness among home inspectors, insurance agents and roofing contractors on the ways to identify the rights-and-wrongs of roof conditions during the inspection of steep-slope, home roofs. This topic discusses on framing and materials for roofs as well as attic maintenance and possible scenarios which may damage the materials and structure of a roof such as wind and hail.

Wild animals have their own reasons to come inside a home; typically all they want are shelter and a warm place for their offspring to live. The attic seems a comfortable enough place for these animals; however, homeowners do not visit this area too often. Due to this reason, critters are especially fond of staying in the attic.

Apart from creating damages to a home and making a lot of common nuisances, critters are prone to bring in dangerous infections, with some of them having the tendency to bite or sting.

Below are some of the critters that you must expect to meet whenever an inspection is done. 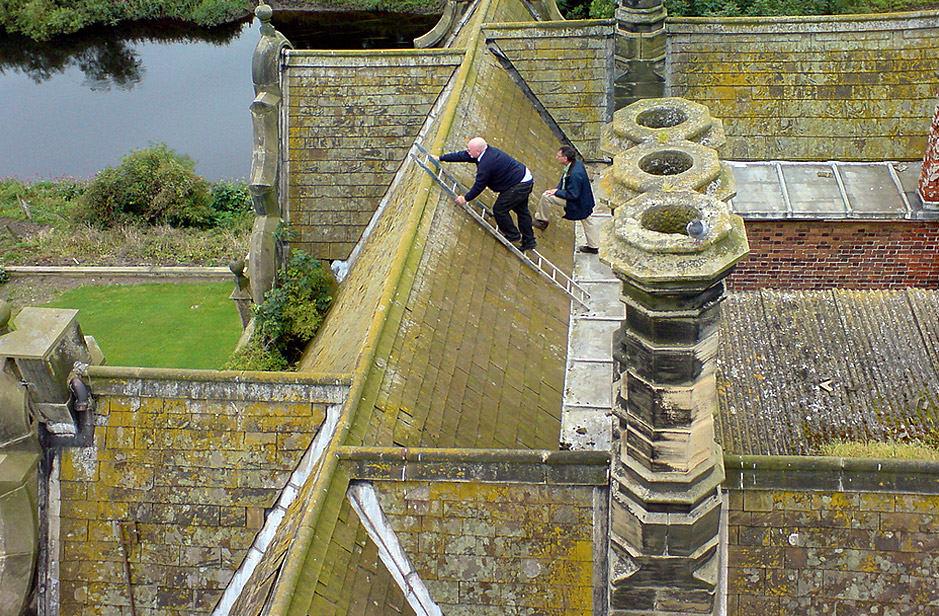 The most dangerous ones can sting, and the sing may hurt a lot and some people may experience allergic reaction due to insect bites. Common ones may include bees, wasps and hornets – these are often found staying in the attic and roof.

The above is an image of a wasp’s nest. Sometimes you’ll only find the nest, and sometimes you’ll find the insects as well. The ventilators and roof penetrations are considered the ideal entrance and exit for these insects. Some simply stay exactly below the roofing material.

It helps if you can recognize your work area and the critters you expect to come across with. Biting insects can be categorized according to their level of aggressiveness. Some tend to attack in the form of a swarm and an immediate manner, while some others may only bite if they are attacked.

If you have gotten a swarm of bees angry, these bees are unlikely to back off. Ready or not, you just have to climb down the roof. Don’t rush though, as rushing can cause unwanted scenarios. Ideally, you want to tie up the ladder before climbing off the roof. However, you’re served with a limitation if you use the ladder, as the possibility of the ladder to slip off the roof is still there.

These are commonly found in various areas of North America. Raccoons love to stay in the attic when they need to raise their young.

They typically enter the attic through the roof. Then, they chew and use their claws to break into the attic. They often enter through a weak spot like a damaged or loose siding and sheathing of the roof. Sheathing often occurs due to ice dams, and critters like squirrels and raccoons can easily break in and enter the attic.

Apart from causing encephalitis, raccoons may cause rabies and distemper; therefore, you should avoid from being bitten.

The example above illustrates the type of space many raccoons prefer to live in when raising their young. The mother entered via the louvers that the inspector had boarded when the mother and her three offspring were chased away with mothballs. The mothballs were thrown in during the early evening, and the raccoons evacuated some time during the same night.

It has been known that rabies can be infected by bats. For treatment of rabies, expensive and abrasive shots need to be given. It can be intriguing as most of the times you can’t always figure out if you have been bitten. If rabies are not treated, fatal consequence is likely to occur.

When you spot bats living in the attic, it is not enough to battle them and protect yourself using a tennis racket. The better option is to leave the attic and inform the occupants.

The photo shows a dead bat with ears similar to that of a mouse, and it was picked up from a dried up sump pump pit. Such a bat can easily squeeze in into a small opening sized no more than 1/4”.

The image displays a group of bats congregating at the interior side of a gable vent.

When you find any bats or bat guanos in the attic, quickly remind yourself that you are at risk.

Some have proven the fact that rabies infection can also occur without having any direct contact. This means the possibility of getting infected with rabies without getting bitten is there. When you notice the colonization of bats, contact the local health department so that they can carry out further investigations.

The image shows the discovery of a pack rat nest in a crawlspace. These critters may also choose to stay in the attic. The size of a nest is often about 3’ across.

Squirrels and where they live

The image shows the nest of a squirrel. When dealing with home inspectors, let them know of the discovery of these nests, if any, and request for a thorough inspection to confirm that the attic is free from critters before a permanent seal is applied to close the holes.

The image shows a common entry hole located at the bottom part of a valley and the cover seems worn out most probably caused by decay.

Birds and the problems they bring

When you find an increasing amount of bird droppings at the same spot or some evidence of nesting materials this is a great sign that your attic has been used as the place for birds to rest or sleep. Starling is typically the type of birds to be found living in the attack. They are histoplasmosis carrier, a type of fungal infection which can infect humans and cause health problems to the respiratory system.

A number of bacteria and viruses found in the attic are capable of entering your body by sticking to your eyes’ mucus membranes. When being in the attic, make sure you put on a completely covered face respirator. Select filters with canisters which can provide sufficient flow of air and at the same time able to provide top quality filtration.